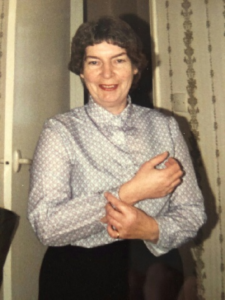 Sadly, Melda White has passed away, following a long illness.

Many will remember Melda as the tower of strength who guided the village from being a pawn of the developer to the dynamic, villager led community that we know today. She was the first village appointed Village Administrator, taking up her post in 1975 (and continuing to her retirement in 1997), having been the Parish Clerk at Meopham previously. Melda set up the basic administrative structure, working closely with Bovis’s legal department, then based in Sidcup. Villagers, through the VA and Residents’ Societies, took over control of the village from the developer, as intended under the arrangements contained in the legal framework known as the Village Agreement. Over 50 years after its establishment, the various village structures are essentially working as they should, largely due to Melda’s guiding hand.

She was instrumental in guiding the lay members of both Council of Management – CoM – (and its sub-committees) and the newly formed Residents’ Societies as to their roles and responsibilities. She was a great support to the various Chairmen of CoM in true public service terms – advising, guiding and warning as necessary.

A physically small person, she was one of those few people who had a presence that seemed to fill a room. She had a reputation as being somewhat tetchy or irascible, but few knew that she suffered from a chronic and painful condition. Equally, she could be utterly charming, a trait that was of great benefit in furthering the cause of the village, particularly when dealing with public authorities.

Melda’s daughter, Maryellen, has observed that her mother was a formidable character and that the VA was her favourite child, albeit a naughty one at times!

Though she retired over 20 years ago, New Ash Green is what it should be through Melda’s many years of unstinting and selfless work, something for which we should all be grateful, now and in years to come.